Hey Athens, Come Out To CINE' on Saturday Night 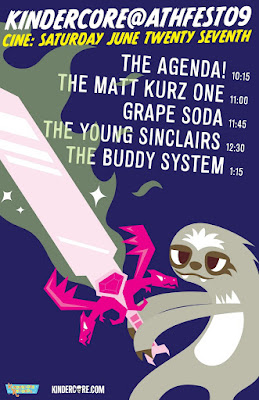 so it's come to this. 5 years ago i was caught up in my silly dreams to become a rockstar...or at least be in a moderately successful band that toured the country, put out albums, and got to be on Letterman and SNL at least once. things went pretty well for a while...we toured the country, released an album, toured the UK a couple of times where we had some good press and a couple of minor hits on the British rock charts...but like all things that i am involved with it eventually fell apart and so i began my 5 year journey into the blah-ness of adulthood...which wasn't really that bad. i mean i had a lot more time to devote to college football (which is always a good thing) and i didn't have to deal with being hungover in Lincoln, Nebraska at 7 AM and then drive to Salt Lake City all day to play in front of a bunch of Mormon punk rock kids. but yeah, i still pretty much missed playing music and getting crazy and acting like a teenager in front of a room full of drunks...

...and so that leads us to this weekend as my old band THE AGENDA! is about to play our first live show together in five years during the KINDERCORE records showcase (our old record label) on Saturday Night as part of Athfest 2009. we're the opening act of a 5 band bill...which is def for the best as the longer we waited to play the more wasted we'd all be. there are few things i have ever enjoyed more in my life than playing live music in front of humans and i fully intend to lose my fucking shit and possibly break a bone (i've got broken ribs from my old antics) or throw out my back (BEING OLD IS STUPID). and let's be honest, who doesn't like a little blood on the dancefloor at a rockshow? if you don't know, my band is pretty much just loud, energetic, ridiculous garage punk, heavily influenced by bands like Black Flag, The Ramones, and the Kinks all mashed into one big dumb ball of punk noise....but trying to describe it is kinda pointless when you can just listen for yourself.
Start The Panic - Agenda!

anyways if you are planning on attending Athfest this year and you're in the mood for some dumb as hell garage rock then come out to CINE' and see us play. we're scheduled to start at 10:15 and our set will be over in less than 30 minutes. and hey the FLAGPOLE has us listed as one of their bands "Not to Miss" during Athfest 09...and when has the Flagpole ever steared you wrong. but i must warn you, the link features a picture of a 24 year old JR Suicide with a terrible haircut that makes me look like the lost Hanson Brother.

once the Agenda has destroyed our equipment and left a trail of chaos in our wake you should stick around and catch a few of the other bands as well. Grape Soda will be playing their spacey dub-rock, The Young Sinclairs (who fucking rule) will become your new favorite band with their 60's/Byrds influenced pop, and then cartoon rockers the Buddy System will close out the night with their completely fun mix of animation and pop...

plus i'm performing a super-secret song with them at the end of the night that should turn Cine' into a riot. the words: Party, Hard, & Andrew WK are my hints for you.

so anyways Athens, GA...i wanna see you there on Saturday Night.
Posted by JR Suicide at 3:14 AM