Pop. 1280 brings some Synth-Doom to this summer. 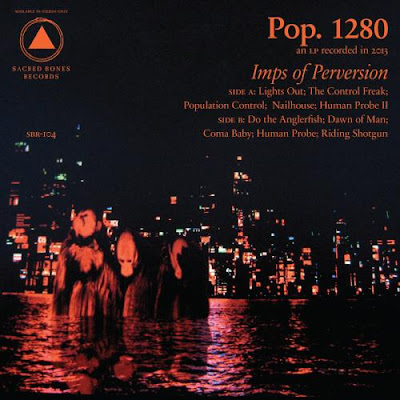 the new Pop. 1280 record, Imps of Perversion is a solid follow up to last year’s The Horror and another excellent release by Sacred Bones Records. it’s difficult to classify Pop. 1280 as these are modern times and they shove everything from No Wave, Noise Rock, Goth, Synth & Post-Punk into a meat grinder and come out with a sound that would be best described as: Fucking Dark. a little bit of Swans, a little bit of Killing Joke, a heavy dose of late 90s post-hardcore legends The VSS…this is music for black leather jackets and blood soaked floors. this is music that wants to pummel you with it’s fist. if they still have a music scene left in Escape From New York, this is probably the shit they were making. love songs for the post-apocalypse. recommended.