Happy Anniversary, In Utero....My Favorite Album Of All Time. 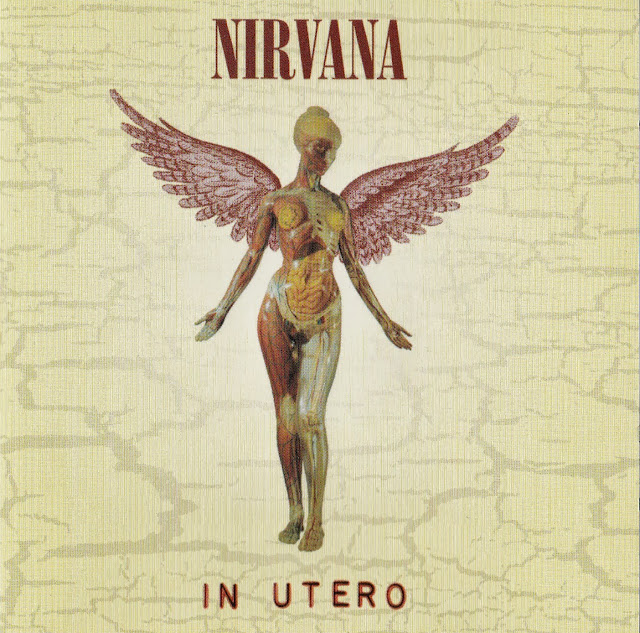 the 20th anniversary edition of In Utero is out today. there are better albums that have been written, but there will never be another album by any band that will ever mean more to me than Nirvana's last studio effort.

i was 13 years old in 8th grade listening to Guns N' Roses and Bell Biv Devoe when Nevermind came out and it may be cliched as fucking hell but it definitely changed everything after that. it's weird to actually notice a cultural shift but being from a boring nowhere place like Augusta, GA listening to Nirvana (and later Sonic Youth) was a FUCKING HUGE way to separate myself from most of the redneck, jock, asshole kids i went to school with. they weren't just a band. not to me. not to lots of kids like me.

flash forward 2 years and now i was a 15 year old zitfaced Nirvana worshipping 10th grader, just like the millions of other zitfaced Nirvana worshipping teenagers all over suburban America whose musical maturation was linked to a white trash kid from Aberdeen, Washington who knew how the fuck to combine punk rock noise with power pop hooks. gone were my Guns N' Roses and Motley Crue  tapes, having been replaced with The Melvins, Mudhoney, The Wipers, Black Flag, and Jesus Lizard. and all that 15 year old kid wanted to hear was the next Nirvana record.

it's very difficult all these many years later to explain how inspiring it was to to listen to In Utero those first few times when i brought the CD home from Sam Goody. here was the biggest fucking band in the world following up the most influential album of the decade with a fucking noisey punk record. it was both a fuck you album and an invitation. nothing would ever sound better to my ears. nothing would ever excite me as much musically. nothing ever got cranked louder in my bedroom. nothing could have better soundtracked my own cliched teenage alienation.

as far as the 20th anniversary edition goes....well Teenage Angst really has paid off well, cuz here i am, a man in my 30s buying an album I ALREADY OWN out of some misplaced since of teenage nostalgia...but then again, i at least already know i like the damn thing. the remastered tracks and b-sides are great and all, but i will admit that the 2013 Steve Alibini remix is pretty fucking killer. he makes the record sound completely new again. everything is louder and noisier and more alive.
20 years later and In Utero is still my favorite fucking album of all time and it fucking always will be. thanks, Kurt. you may have been a selfish dick, but you sure knew how the hell to write some killer music.