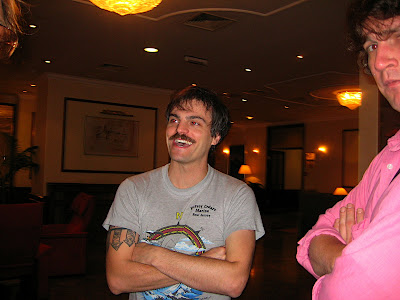 on my way to Athens for the memorial of a friend tonight.

Jerry Fuchs died over a week ago. he the was the drummer of Maserati as well as !!!, Turing Machine, LCD Soundsystem, and about every fucking band in New York City from one time or another. but that doesn't matter. what matters was the he was a really awesome guy and everyone who ever knew him is really sad right now.

Me & Jerry weren't close friends, but still he was someone i always enjoyed seeing and hanging out with. i met him about 5 or 6 years ago when my band was playing a show with some of his friends, Panthers, in Atlanta. i'd seen him play drums in Turing Machine and thought he was a total badass so i was honestly a little intimidated to talk to him. he came up after the show and started talking to us and we got to drinking and he was really nice and really funny. about a year after that he was in Athens for New Year's (i think...maybe it was just Christmas break) and he and i got drunk as shit and talked about being old dudes and about our hairlines and made fun of ourselves and had some good laughs. i had an instant man-crush for life. Jerry was fucking rad. totally unpretentious and amazingly talented and just really fucking funny and really nice. i am gonna miss him.