Velvet Goldmine Still Sucks After All These Years 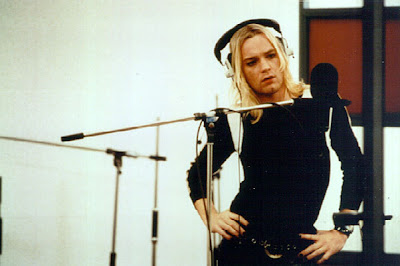 Velvet Goldmine was on earlier tonight. i watched it for the 1st time in years to see if my opinions about it had changed. they hadn't. it still sucks. i know a lot of people who love this movie, but i think most of them are tricking themselves.

i remember when that movie came out i was really excited because i've always loved 70s glitter rock. i had to drive to Atlanta because it wasn't playing in my town and then i watched it and i got a pretty empty feeling afterwards, having wasted so much of my time being stoked about it. i thought it looked fucking cool and the costumes were great and the soundtrack was killer but the story was total crap (which is kinda what you can say about every Todd Haynes movie). i know it's supposed to be a sort of fairytale about an imagined love affair between young Bowie and Iggy Pop and also a love letter to the era when being a dandy was all the rage and also it has something to do with Oscar Wilde being an alien...or something. and all that sounds great on paper, but it hardly works as a movie. really it's just a bad ripoff of Citizen Kane with some Rocky Horror Picture Show thrown in for good measure.

Hedwig and the Angry Inch is so much better a version of this movie than Velvet Goldmine could've ever hope to be. about the only thing amusing was Ewan's Curt Wild character and his weird mash-up of Iggy Pop, Lou Reed, and Kurt Cobain.