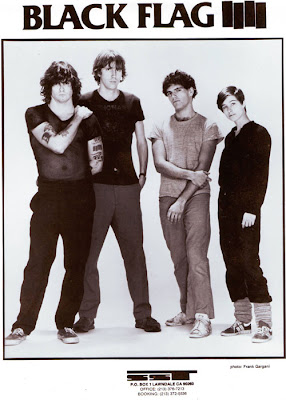 number of years i have been listening to them: since 1991
how i got into them: i was already aware of Black Flag from childhood thanks to their inclusion on the Repo Man soundtrack (which was one of my favorite movies when i was growing up. we owned it on VHS and although i knew jack shit about Punk rock…i did know i thought it was pretty awesome.) but i can’t say i really began listening to Black Flag until years later. as i mentioned before, 1991 was a big year of discovery for me. it was 8th grade and i had just been introduced to the world of punk rock. i honestly don’t remember what magazine it was, but i wanna say Guitar World, that had an issue where they listed the 20 greatest punk rock records of all time and on that list were both Damaged and First Four Years by Black Flag...and so naturally being a kid who likes owning the essentials i purchased both of these cds.
favorite album: First Four Years
favorite songs: depression, six pack, nervous breakdown, gimme gimme gimme, slip it in, black coffee
direct influence on my musical taste: they are the yardstick by which i judge all other punk bands.
Posted by JR Suicide at 1:46 PM