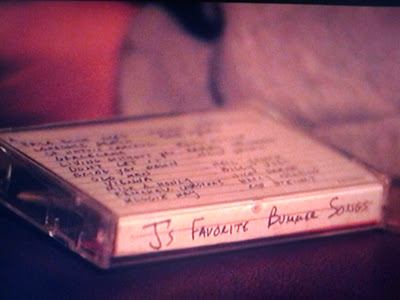 Inglourious Basterds may have been my pick for BEST movie of 2009, but without a doubt my FAVORITE movie was Adventureland.

While America was busy watching Fast & Furious the weekend this movie came out, i was going to the Theater to see Adventureland...Twice. the last movie i saw twice was The Dark Knight...so that's about as ringing an endorsement of a film as i can give it. besides any movie that opens with The Replacements "Bastards Of Young" is gonna have my love from the word go...if that movie actually turns out to be one of the best teen/young adult coming-of-age movies in years...well that's just a bonus.

Set in the summer of 1987, Adventureland is the story of James Brennan, a recent college grad with plans of spending his summer in Europe exploring the old world with his college roommate and having a transformative life experience before heading off to Grad school at Columbia. Unfortunately James learns that his summer plans and possibly his Ivy league future are in jeopardy when his parents spring on him that they've hit financial hard times and can't afford his trip or to pay for his rent in New York City next year...and so James must take the only job that his four years of comparative lit have made him qualified for...as a carny at a shitty amusement park called Adventureland.

Oh yeah, and James is a virgin...the sort of plot point that would normally remind you of movies like American Pie or Super Bad (the director Greg Mottola's last film)...you know, over the top and laugh out loud raunchy teen comedies that are more fantasy than reality...but Adventureland is more in the realm of a Cameron Crowe movie, a little smarter, the laughs more subtle and relateable. Luckily James' virginity isn't part of some ridiculous quest or pact to lose it before x day or anything like that...instead its more of a way for us to understand that James is an intelligent, sensitive, over-thinker who is more interested in finding love than getting laid...a classic hopeless romantic whose wooing techniques are to talk about literature and make a girl a mixtape of his favorite "bummer songs"...so yeah, the same school that a lot of shy young men who ended up playing in indie rock bands or became writers graduated from. And so James is highly realistic in his awkward, slightly pretentious, and yet somehow self assured way.

When James begins working at Adventureland he meets Joel (smartass, Russian lit loving, misanthrope) who shows him the ropes, explaining to him that all the games are rigged and let's James know that he must never give away a Giant Ass Panda (the best prize at the park) as it will result in him losing his job. On his 2nd day some rednecks demand said Panda after cheating on a game and threaten him at knife point if he refuses to reward them...this is when we meet Em, who shows up saves his ass...setting into motion our little love story that is the heart of this movie. Later that night she gives James a ride home and the two silently listen to Husker Du's "i don't wanna know if you are lonely" on the car ride home, sharing some awkward yet knowing glances and smiles with one another...bonding over the mutual love of a great song.

Em is a NYU student working at the Park as an excuse to get away from her bitchy stepmother. she's smart, pretty, and emotionally screwed up...she's also having a secret affair with Connell (played by Ryan Reynolds), the park's handyman...an older, very married, local musician whose claim to fame is that he jammed with Lou Reed once and tells James he's planning on moving out to LA and starting a new band soon. Things become more complicated when Em and James friendship starts to become something more when James kisses her after a night spent driving around listening to "pale blue eyes" (seriously, my favorite song of all time). and so this little love triangle of sorts creates most of our drama as Em becomes more and more depressed with her current situation with Connell as she begins to open herself up to James. this of course results in causing James a lot of angst before things finally come to a head in the whole Em, James, and Connell thing.

the plot isn't anything we haven't all seen before...young man coming of age falls in love with a girl who is afraid to fall in love...but the performances by Jesse Eisenberg (who is stealing some of Michael Cera's leading geek man thunder) and Kristen Stewart (who proves that she can actually act) are what make this worth seeing, as they are both 100% likeable and believable late teen/early 20s characters. it made me jealous that i'm not 20.

the rest of the cast is great too. Ryan Reynolds plays the washed up local musician Connell as a guy who is sort of resigned to his sad pathetic life and passes the time the only way he knows how by sleeping with younger girls just to get through the day...even if he's kind of a creep, he's also completely relateable. there's also the park's resident hottie Lisa P., who ends up becoming James backup plan to Em when she becomes flaky about their relationship. Bill Hader and Kristen Wiig of SNL play a married couple who run the park, with Hader supplying most of the most hilarious moments. then there's Frigo, the idiot kid from back home that's emotionally stuck in highschool who spends most of the film supplying crotch punches. and then finnaly there is Jole, played by Freaks & Geeks uber-nerd Martin Starr, who gets all the movie's best lines and steals every scene that he's in.

the real star of the film is the soundtrack though. i mean goddamn! you've got 80s college rock heavy weights (The Replacements "bastards of young" and "unsatisfied", Husker Du "i don't wanna know if you are lonely", The Cure "just like heaven", & The Jesus and Mary Chain "taste of cindy") that help to define our two main characters. some 70s punk (New York Dolls "looking for a kiss" & Nick Lowe "so it goes") and some choice 80s one hit wonder cuts (Crowded House "don't dream it's over" & The Outfield's "your love"). then the quest to use every single Rolling Stones deepcut ever in a movie is carried on with the inclusion of "Tops" (a personal fav). and finally we've got 3 Lou Reed/Velvet Underground cuts ("pale blue eyes", "here she comes now", & "satellite of love") that make up the heart of the movie...especially "Pale Blue Eyes" that is used perfectly to reflect James' longing for Em. there's also a reoccurring joke as the song "Rock Me Amadeus" is played constantly at the park that slowly drives our young heroes mildly insane.

the way this movie was marketed was as a teen gross-out comedy/follow up to Superbad pretty much insured that it was gonna fail at the box office...if you are a fan of Almost Famous, (the highly underrated) Thumbsucker, or the class John Hughes films then you will love Adventureland too. a sweet, thoughtful, a little bit melancholy, coming of age and falling in love for the first time film that makes you long for the days when making a girl a mixtape was a big deal. 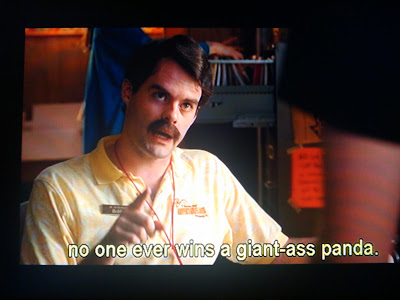