an ode to the van that tried to kill the Agenda. Dwayne, i hope you are rotting in van hell. 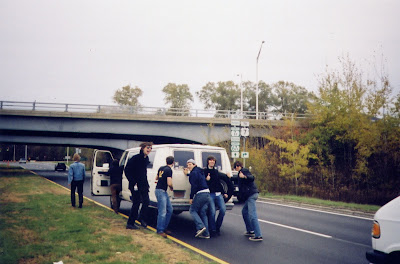 before my band went on our 1st coast to coast/ 2 and half month tour we bought this old van from a fellow Athens band, Macha. the name of said van was Dwayne. Dwayne was a piece of shit.

on the way to our 1st show in Columbia, South Carolina it fucking overheated after being on the interstate for less than an hour. that night some kids at the show also stole our licence plate.

then we had to drive the licence plate-less Dwayne up the East Coast. at some point between North Carolina and Washington D.C. our fan belt broke.

oh yeah, we also blew out a tire and almost died somewhere in Florida on the way to Miami. and this was all in the 1st two weeks.

then on our way from upstate New York to Vermont, the van threw a fucking rod and died in a tole booth. we had to have the van towed all the way to Bennington College to play a show that night and then the next day The Agenda and our friends Paper Lions and Maserati had to push the motherfucking thing to a repair shop in the hope it could be fixed one more time. the mechanic declared Dwayne fucking dead.

all was lost.....but luckily our drummer and guitarist’s parents bought us a new van and we didn’t have to spend the rest of our lives in Vermont eating Ben & Jerry’s.

the moral of this story is don’t ever buy a van from Macha.
Posted by JR Suicide at 4:52 PM