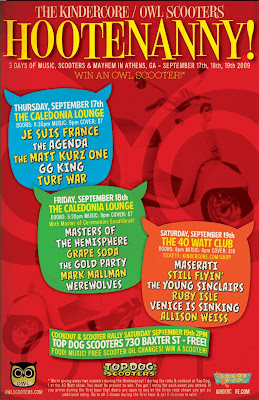 Kindercore Records is kicking off the new school year right with a 3 night festival Sept. 17th-19th. lots of good local bands from the Athens/Atlanta area will be rocking all 3 nights. also the festival is being sponsored by the new local scooter company OWL MOTORS who will be giving away some free scooters during the fest.

the lineups for each night

Thursday Sept 17th has been dubbed the ROCK NIGHT @ The Caledonia


Friday Sept 18th has been dubbed the POP NIGHT @ The Caledonia