Last Night I Dreamt that i was at a Rap Metal show...and it was real. 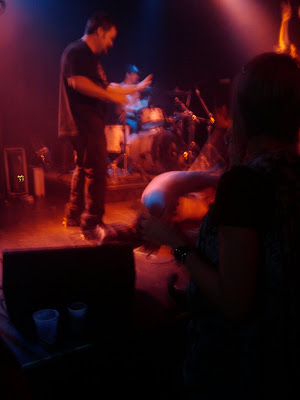 file under: weird shit that happens in America that i didn't even know about until last night.

so, last night i went out and met up with my friend Brian at the Bar to discuss our new thrash band. and we were drinkin and hangin out and noticed all these weird looking trolls that were shuffelin into the the bar and into the backroom where they have shows. then suddenly we heard some of the most awful sounds imaginable coming from said back room and decided to go investigate. what we discovered blew my mind so hard that it sobered me up completely.

it was a rap metal band playing rap metal music for rap metal fans!?! i was sure that i had somehow got caught up in some LOST time shifting shit and was now in the year 1998...but nope, it was the year 2010 happening now in front of my face and inside my ears. i was so fucking confused the whole time that i didn't even take any pics of the band....WHO LOOKED AMAZING I MIGHT ADD. they were playing rap-metal covers of "Soulja Boy" and "In Da Club" and announcing to the crowd about their own songs that "this song is about gettin' high!" and "this song is for all the strippers out there!" i shit you not. at one point in the show they convinced two girls to get up on the stage and "Be Strippers" and two douchey guys to be "the stripper polls" and then played their song while both girls fucking did the nastiest shit i have ever seen girls do with their clothes on. the pic above is too blurry but it's one of the girls laying on her back with her legs spread wide and then a second later the dude put his head in her crotch. WHAT THE FUCK IS WRONG WITH PEOPLE?!?! anyways she also put the guy on his back and did the splits on his face. i think she may have been a pro. anyways, Brian and our friend Brandon got up on stage and started humping one another to which the singer of the rap metal band called them fags. it was kinda awesome.

but yeah, the point of this story is that people are still playing in rap metal groups and also people go see these groups. and IT IS AWESOME.

Labels: music that sucks but still exists anyways, what the fuck