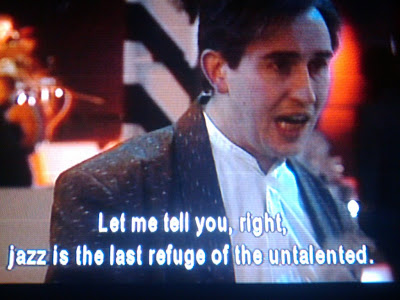 It's true that there's probably more unlistenable Japanese noiserock on my itunes than any human should or would ever need to listen to...and believe me it doesn't get listened to much. BUT there are times now and again when I feel like having my eardrums raped and so I put on a Les Rallize Denudes live bootleg and place my headphones on (so as to save the world from the walls of feedback) and I drift off into a zoned out state...but mostly I like to listen to The Stooges instead. Especially Fun House, an album loaded with jazz influence. I've always said that Fun House is the closest I will ever get to listening to Jazz. Sure I own a Sun Ra record and I've listened to Bitches Brew a time or two but really I have no love for Jazz as a genre. It just does nothing for me. Maybe if I had been born in a different time or place then i'd have some respect for it...but mostly I just couldn't give a flying fuck about it. Call it my one major musical ignorance, but yeah...I Don't Like Jazz.
Posted by JR Suicide at 4:57 PM