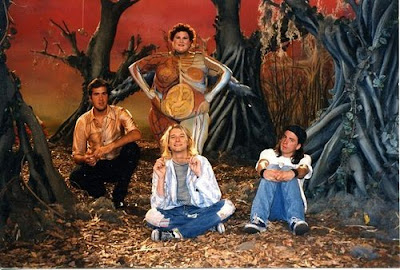 I make no apologies for the fact I am a 1990s suburban teenage cliche. I was 13 years old when Nevermind came out and at the time I was scrawny, dorky, not very popular, and very interested in music and so Nirvana easily became my favorite band because they were everything that all the kids I hated in middle school were not, weird. Liking Nirvana of course lead to me learning about bands like Sonic Youth, Dinosaur Jr, The Jesus Lizard, and more importantly discovering 70s/80s punk and post-punk.

Nirvana's music will always be important to me but even more important is that Kurt was a shameless name dropper and I was a teenage sponge who bought up every recommendation. Almost every weekend of my early life was spent trying to get rides to Athens or Atlanta where they had real record shops so I could try and find the albums that I had on my Kurt List. Gang Of Four, The Wipers, The Raincoats, Melvins, Black Flag, Bad Brains, Scratch Acid, The Slits, Sex Pistols, etc. Which of course lead to more and more discoveries and so forth. It's the kind of dept to a band that will always give them a lofty status in my mind. So thanks Nirvana.
Posted by JR Suicide at 6:15 AM

Labels: always talking about the 90s, nirvana, when i was a kid