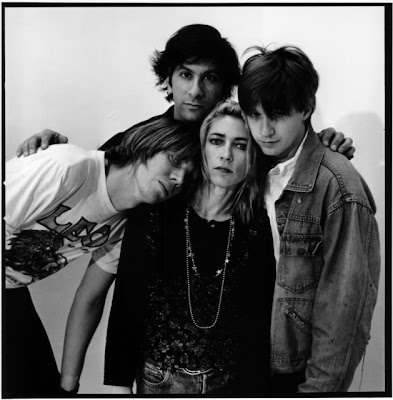 number of years i have been listening to them: since 1992

how i discovered them: the Nirvana effect. i bought 1991: Year Punk Broke on VHS for the Nirvana moments but fell in love with Sonic Youth.

favorite album: this changes every couple of years....but right now EVOL is #1.

direct influence on my music taste: if the term Indie Rock is in fact in a dictionary somewhere, then the picture right next to it would/should be Sonic Youth for their combinations of inventiveness (is that even a word), integrity, and overall quality output for nearly 30 years. if you are like me you probably discovered Sonic Youth as a result of getting into Nirvana. i bought a copy of 1991: The Year Punk Broke which starred Sonic Youth, Nirvana, and Dinosaur Jr on their 91 European tour together. i instantly fell in love with Sonic Youth, i went out a bought Dirty, Daydream Nation, Goo, and Sister (which took me about a month to find) and listened to them constantly. i then traveled farther back and bought a cassette copy of Confusion Is Sex which helped send me down a path into noise band addiction for a good long while. when DGC re-released all the bands old albums on CD i bought every single one that i didn’t already own. i also went and saw Sonic Youth every time they played Athens or Atlanta during my highschool years. thanks to Thurston Moore’s record snobbery and desire to namedrop his love’s and influences in interviews i learned about No Wave, Japanese punk rock, forgotten 60s Psychedelic bands, Sun Ra, and discovered that The Stooges’ Fun House was indeed the greatest album ever created. Sonic Youth was that band i listened to that i didn’t worry about the jocks and preppy douchebags getting into because other than Dirty none of their albums were that commercially appealing to your average 90s southern suburban poseur. and so they were more than any band i listened to in all of highschool, 100% mine.
Posted by JR Suicide at 4:23 PM