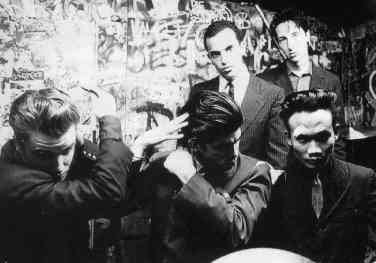 being into music isn't just an interest…it's a fucking full time job for some folks.

Music Snobbery is something that most people of a certain demographic will take part in from their late teens well into their early 30s. for most music snobs it was likely that during college they would spend some time working for the local college radio station or at a record store honing their craft...or maybe even starting a band to help out in the endless cycle of trying to be cool and get laid....or if they were really lucky and had some rich parents or a trust fund they might even put out a record or two on their own label..this is the Mortal Kombat finishing move of Music Snobbery. this is essentially what happens to people who didn't like sports or weren't good enough to make their highschool baseball team. and this goes on and on until they stop caring as much about music because they either:

b) get burnt out on trying to one up their friends and retire from music snobbery content with the knowledge that they have excellent taste and can no longer learn anything of true value.

back in the olden days before the Internets it was a very difficult thing to be a music snob, you had to read magazine articles and books about underground rock n roll to hear about new bands or "important" older bands and then you had to devote lots of time and money into traveling to out of the way independent record stores or ordering things through the mail without ever hearing it first. this made for some interesting discoveries (the raincoats, the wipers, the vaselines...aka anything kurt cobain listed as a major influence) or it could result in some really crappy cds that you couldn't sell at the used cd shop (free kitten, gumball!). and back in these happy times it really meant something to be able to namedrop some bands on other music snobs to let them know you were in the know and not a total poseur.

then something terrible happened: THE INTERNET. and everything went to shit and it was as easy as clicking on your mouse and downloading a song by some obscure band from Scotland that only had 2 eps and you could suddenly claim you'd heard them way before anyone else or whatever. the effort was now totally gone. but even though it has become much much easier to know about cool music, it's still important to be into the right cool music…especially if you are a person younger than 23 who is talking about music to a person older than 29. there are certain bands that you must be aware of if you are to ever shed the label of young poseur. post punk as a genre is really a cottage industry for a good name dropper to verse themselves in. liking the Cure and The Smiths don't count.


1. Sonic Youth (although very popular at one time, you must always list them as one of your favorite bands)
2. The Nation Of Ulysses
3. Nick Cave (Bad Seeds/Birthday Party)
4. Gang Of Four (it's important to understand that all dance punk bands are gang of four clones)
5. The Jesus And Mary Chain (it's important to call bands out for ripping off the JMC)
6. Modern Lovers
7. ESG (also good to play their songs at dance parties to impress certain people)
8. Pere Ubu/Rocket From The Tombs
9. Mission Of Burma
10. The Fall/Wire (UK punk bands that stayed around forever and everyone likes to list as an influence)
11. Joy Division/New Order/followed by as many obscure Factory Records bands as possible (A Certain Ratio's always good)
12. The Clean/The Bats/The Verlaines (any indie band from new zealand as this is the birth of indie pop and that's what the Shins are)
13. Can/Faust/random German Krautrock
14. James Chance/No Wave as a genre in general
15. Hawkwind/early 70s proto-metal, space rock, obscure prog, etc...
16. This Heat/The Pop Group/unlistenable Freak Funk
17. The Gun Club/X/The Zeroes (other early LA punk bands as they are less popular than New York and London bands)
18. Suicide/New York Dolls/Television (70s new york city punk that isn't the Ramones or Blondie)
19. Swell Maps (important to note they influenced Pavement)
20. Captain Beefheart (although i don't know anyone who actually listens to them who isn't 40)
21. Pylon (unless you live in Athens...then it's not big deal)
22. The Sonics/the Monks (garage punk pioneers)
23. Neu!
24. Drive Like Jehu/Jesus Lizard/Big Black (thinking man's dude rock)
25. The Wipers/Raincoats/Vaselines (aka the Kurt Cobain obsessions)
Posted by JR Suicide at 2:36 PM