that time Courtney Love yelled at me

many moons ago my old band was on tour and playing a show in LA. the show was mostly a disaster, as we were opening for Lou Barlow and were forced to play way early in the night before the show really even was supposed to start (i mean seriously this was in 2002. Who the Fuck Gave A Shit About Lou Fucking Barlow anymore?!) and nobody really saw us other than this lawyer dude who tried to be our manager and all in all it was one of those waste of time shows that makes you wish you had the night off. anyways we were about to start a short leg of our tour with Har Mar Superstar & The Gossip...two groups we were excited and happy to be opening for. anyways after the Lou Barlow suckfest we headed for Hollywood to meet up with Har Mar who was having a CD release party at the Roxy. the party was fairly surreal for me as it included Fred Durst and that dude from Puddle Of Mudd who thinks he's Kurt Cobain, a passed out 17 year old Jack Osbourne, and Nick Zinner from the Yeah Yeah Yeahs. we stayed at the party for a while, got drunk, talked about our upcoming tour with Har Mar, laughed at Fred Durst getting kicked out of the party for being a dick, and then eventually decided to head out and make our way to San Diego which was where our tour was about to start.

anyways as we were leaving the party we discovered that our van was being blocked in by another van with a big EPIC records logo emblazoned along the side. someone jokingly made a comment that someone famous was probably inside...to which a moment later an obviously intoxicated Courtney Love came bursting out of the Van clutching an equally drunk Kelly Osbourne. i yelled, "Holy Shit!" and our guitar player, Ryan, pulled out his camera and took a quick snap shot of the famous drunkards. this caused the intoxicated Courtney to turn in our direction and begin shouting at us. frozen in terror we stood still as the henious woman beast spewed forth a couple of insults our way before suddenly asking us is we were a band. we acknowledged that we in fact were. she then mockingly asked if we were one of those "THE Bands" (aka The Strokes, The Hives, The Vines, The Every New Band In The Year 2002), to which we shamefully acknowledged that we in fact were. she then made comments about us having nice "heroin mullets" (no such mullets were in existence...hell i was the only one with long hair) and then asked where we were from. when we told her that we were from Athens, Georgia her tone completely changed and she became strangely nice and interested in us. she spent five minutes explaining to us that she loved Athens, was friends with Michael Stipe (a fact we were already aware of) and then began making reference to the fact that she was hanging out with Kelly Osbourne and calling her "Sweet Leaf genes". then she asked us for a demo tape (which we didn't have), told us not to let Michael Stipe produce our record, and then stumbled off into the night on her way to the party we had just left, leaving us with an amusing story to tell our friends and a picture to help us cherish the bizarre encounter.

here is said photo...notice the perfect Sunset Blvd sign in the background that helped fully sum up the surrealness(is that even a word?) of this event for me (we made copies of it at Wal Mart and chose the American Heroes border because we felt it was a fitting tribute to the woman who drove Kurt Cobain to kill himself). sorry for the shitty quality...i had to take a photo of the photo with my camera phone because my scanner is broken. 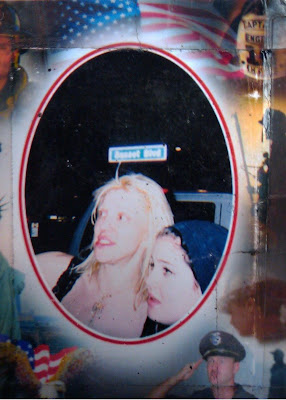