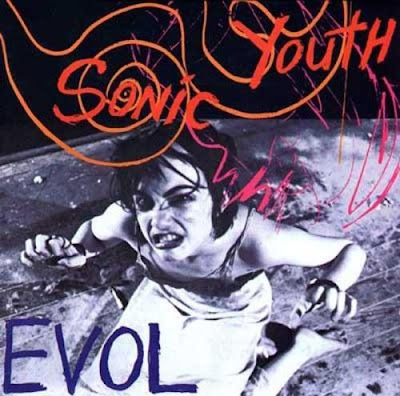 the first Sonic Youth records i got were Dirty and Goo and they were my favorite albums in high school....and then Daydream Nation replaced that, and then Sister became my favorite record. but now as i am older and have been listening to Sonic Youth for about 17 years i realize that EVOL is their most awesome album. it combines the experimental elements of Kill Yr Idols and Bad Moon Rising with actual songs and song writing. there's something hypnotic about the opening songs "Tom Violence" and "Shadow of a Doubt" that draw you in and then "Star Power" blows you away..."Green light" is another standout and the cover of Kim Fowley's pop classic "Bubblegum" shows off their eclectic taste, and then finally there is "Expressway to Yr Skull" (also called Madonna, Sean, and Me), which might be the ultimate Sonic Youth song ever with the perfect combination of Syd Barrett era Pink Floyd popiness and White Light/White Heat era Velvet's whitenoise explosion....it's almost Krautpunk.

EVOL is by no means SY's most accessible record or even the first, second, or third album that i'd recommend to someone...but of all their albums this one ages with you the best.
E.V.O.L. - Sonic Youth
Posted by JR Suicide at 1:54 PM